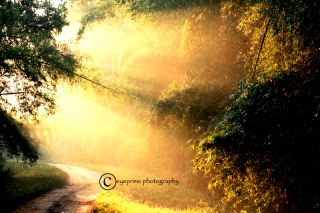 With growing popularity Kanha is teeming with people, increasing substantially every season. The nearest airports being Jabalpur and Nagpur, which is fairly well connected with the rest of India, Kanha is exceedingly accessible.

The part of the park opened to public has been divided into four zones, namely Kanha, Kisli, Sarhi, and Mukki for better administration although there are no physical boundaries. There are two access points to enter the park, Mukki gate and Khatia gate. Mukki gate is nearer to Nagpur, but it is more convenient to visit all the zones from Khatia gate. 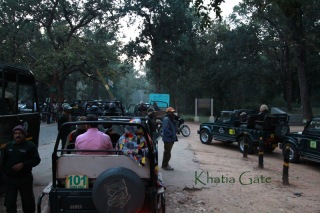 Once we entered the park, the temperature dropped a few more degrees. The vegetation is dense and picturesque. The jeeps are open gypsies and very apt for witnessing wildlife, as they are four wheel drive petrol vehicle making least noise and pollution. Some zones are frequented more and thus the spotted deer which are abundant in the park do not run away at the sight of the vehicles. The Sambhar deer is shy by nature and loves to stay amidst the vegetation, occasionally crossing the pathway or grazing nearby. We sighted a female barking deer, which is an extremely rare sighting. Golden Jackals were always seen in pairs and only a single couple in an area. Gaur (Indian Bison) herds have plenty to graze on and they looked fabulous. All the animals had shinny coats and well nourished looks. Gray Langur and spotted deer live in perfect harmony and are a joy to watch. 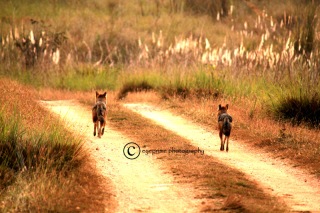 There is an abundance of bird species in all the zones, but Sarhi we found is like a repository. Sarhi seemed to be least visited but has an awe-inspiring landscape with huge open grasslands and virgin dense forests, even the animals looked petrified to see us at a distance of 200mts, jerked and vanished into the forest as fast as possible. We got a glimpse of the female blue bulls, which looked more like small horses, much bigger than the deer. 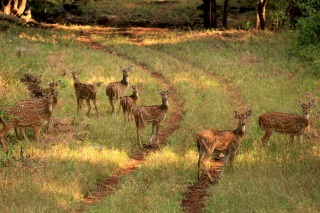 The water body in Kisli zone on the right of the pathway as we enter the park is a good place for bird watching. Also there are specific trees where the hawks, the vultures or the cranes love to perch. The experienced guides are well versed and can identify such places. We got to know a gentleman called Salim (09425417436) who drives his own jeep into the forest and is a naturalist in his own right. He can also help with the park bookings and stay at Khatia. 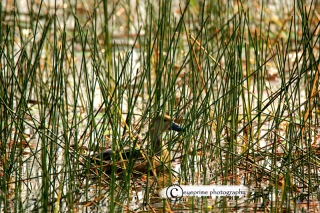 Finally the big cat sighting, the question one faces as soon as they reconnect with peers and anybody who had been aware of the jungle visit. The answer is Veni vidi vici and it wasn’t just a sighting. We were blessed with witnessing two occurrences of Bhima the tiger deciding to show up and flaunt his royal self. 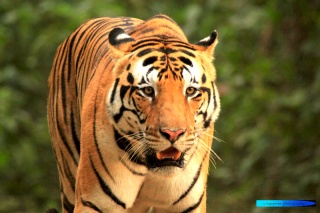 The second sighting was more like a show where in an invisible director was directing his moves. Bhima moved in the bushes adjacent to the pathway towards a water body called “baba thenga”, sat there for a while, got up, moved around the water body taking in the scent of a women (Tigress) he was desperately in search of. Well he is in the prime of his youth and its mating season, got to give it to him guys. He marked a tree, slipped into the water to cool it off, you know ! Then straight came out of the water at us. Not attacking though, actually we seemed to be oblivious to him. He walked a little, sat, rolled over and kept on trying to smell her.

The park timings are to be followed so strictly that you got to leave a TIGER on the road wanting to give more… shots I mean. 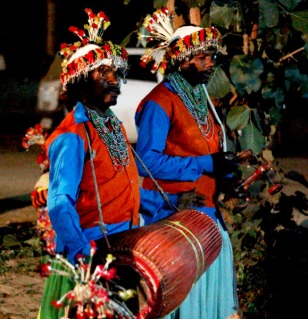 Apart from the mesmerizing jungle with its inhabitants there are the beautiful “Baiga” and the “Gownd” tribes who are trying to fit into the so called civilized fabric of our lives. We visited their villages, saw their rhythmic dance and tried some mahua too ! 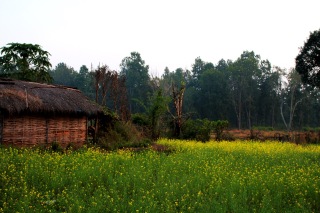 Both the gates are flanked by resorts and eateries of all levels. Khatia gate has Club Mahindra whereas Mukki gate has the Taj. We stayed at a place called Windsor Tiger Resort (Contact Santosh Yadav – 09424339613, 09644145995, 07649-0277243) near Khatia gate and at INR1500/- a night; it was a fairly decent place with facilities of dining, bonfire and very responsive and cooperative staff.

The safari timings change depending on the season. Around November the morning safari starts at 6:15 AM, which in the warmer months starts at 5:30 AM.

The jeeps that go in for the safari must return to the gate by 11:00 AM sharp. Now here comes the explanation for the convenience of visiting the zones through the Khatia gate. The first camp once we enter the park through Khatia gate is 10 mnts away, called Kisli. This is also the entrance to the all the zones. MTDC has log huts here which can be booked online or otherwise. Also there is Baghira lodge and other administrative offices. This camp has restrooms and tea / coffee. Kisli zone is spread on the left and right of the pathway that the jeep has to take. On the left are Kisli and Sarhi zones, on the right are Kisli and Mukki zones, straight ahead is Kanha zone. Thus it takes less time to come back to this Kisli camp, from any of the zones, which the vehicles must pass back at 10:45AM. 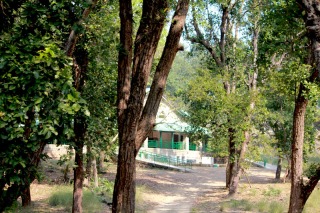 The evening safari starts at 3:00PM and has to wrap up by 5:30PM in winter. The warmer months get an extension of about a half hour.

If one enters through the Mukki gate, reaching the camp in Sarhi zone, which is at one end of the park and also has a gate which may be to be opened at a later date, becomes impossible within the stipulated time. Though it is a matter of personal preference and associated circumstances which largely govern the selection of the gate to enter the park.

It is worth mentioning that it would be a good idea to drain out the bladders whenever possible as the camps are distant and disembarking the vehicle at any place other than the camps is prohibited at all costs. Visiting the restroom at the Kisli camp before getting ahead with the safari is highly recommended, this helps to be at ease till one reaches another camp, especially in the morning. Apart from Kanha camp which also houses a museum along with a curio shop, no other camp has snacking facility, thus one needs to carry breakfast along. 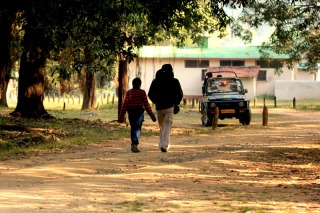 The way to enter the park is through advance booking online (https://forest.mponline.gov.in/Index.aspx) or current booking at the counter adjacent to the gate . In both the cases one has to queue up at a counter with the ticket (booked online or at current booking counter) which shows booking for a particular day (morning / evening), particular zone, particulars of people with their ID numbers. This counter allocates a guide and a jeep for a fee of INR 2200/- for the Jeep and INR 300/- for the guide (November 2015 rates). One needs to carry the same identity proof as mentioned in the ticket for verification purpose. All of this is mandatory each time one wishes to enter the park.

The road from Nagpur to Khatia that we took to reach Kanha 250 kms away was roughly a 7 hours drive with lunch and tea breaks, it is ravishingly lined up with Teak trees, colourful town and village markets, wide open fields and ofcourse parts of Pench national park, which is also a must visit for jungle lovers. Well another time, another day !
Please feel free to get in touch for more details…. moutushig@gmail.com